“You could never get Aucklanders out of their cars”

The story began with the narrative that “you could never get Auckland commuters out of their cars”. The Auckland region had been guided by city leaders from the early 1950’s to be a “Los Angeles of the South Seas”. Post war growth was planned exclusively around a motorway network, with low density sprawl over a huge area. Over the decades Auckland became known for its suburban lifestyle and its traffic congestion. The luxuriant sprawl that followed the beaches around the intricate coastline created pinch-points through the region whenever the two harbors on each side of the city squeezed close together. The central city area withered away as did the regional rail network. At a low point in the early 1990’s, trains carried just 900,000 passengers per year in a geriatric fleet of wooden carriages populated largely by old men with suspicious smelling bottles in paper bags and graffiti artists.

In recognition that existing transport investment patterns in “motorways only” could not continue, an impressive new downtown railway station opened in 2002. However, it was a controversial move politically, and a financially high risk endeavor.

The rail network was in many cases, a slow speed crawl along a single track line serving a string of derelict suburban stations. The station buildings portrayed the grandeur of a long lost era behind the graffiti, and through layers of faded and peeling paint, and boarded up windows. There were also one or two ‘contemporary stations’, scratched and tagged ‘bus stops’ planted on patchwork concrete platforms in industrial wastelands.

The “steam age era” carriages were traded in for second hand diesel units from Australia and patronage started to turn. It was clear that much more needed to be done, but without further significant funds, the options were limited. In the words of the Auckland rolling stock manager at the time: “There wasn’t much point having a big flash station at the end of the line only to have the occasional broken-down train running in there”.

The decision was made to “do up” the former Australian rail cars. The brief given to Keith Strode-Penny of Barnacle Design; was to perform an extreme makeover on the interiors as this was recognized as one of the few areas that could give Aucklanders a taste of what a modern commuter rail network could be. 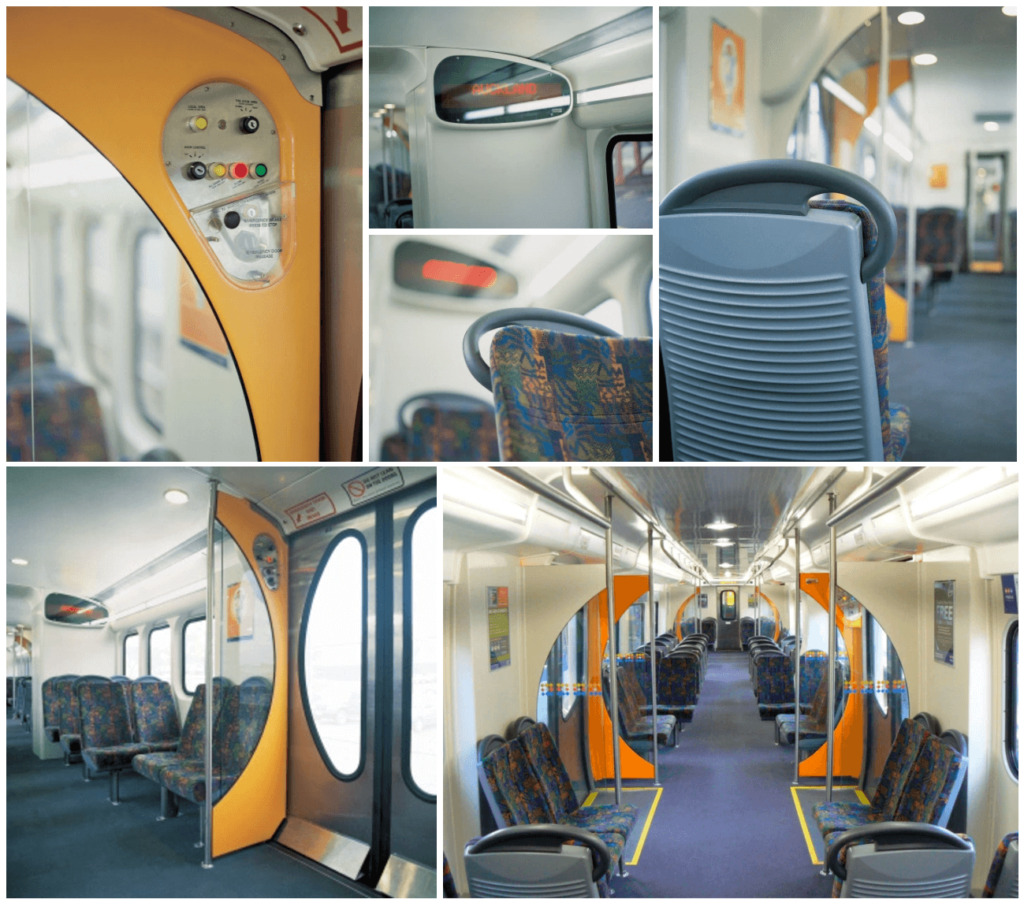 Many New Zealand rail commuters use the train through choice rather than necessity. Comfort expectations were high and based upon modern cars and aircraft interiors, rather than trains, as there was no history of commuter rail use. Other design inputs included corporate and hotel lobbies, trendy cafes and retail environments. Design inspiration from “kiwi” cultural values and experiences were applied into vehicle interiors that Auckland passengers would be tempted to travel in.

Spatial and lighting design, colours, fabrics and finishes were the building blocks toward constructing a ‘customer focused’ interior. The spaces had to be comfortable and secure. Auckland was developing an overall passenger network brand that reflected its place as a cosmopolitan city of the Pacific. The brand values needed to be applied through the selection of thematic elements and finishes.

Stylish and uplifting creative interior concepts needed to work within the financial constraints of the project. The overall package of branded and thematic elements needed to provide a uniform customer experience across a diverse second hand fleet.

A big challenge was ensuring as far as practical that the second hand fleet could meet modern compliance requirements in a transport environment. Materials and finishes, including Forbo’s Flotex flooring all had to meet international benchmarks for fire ratings. Design solutions were required to meet the requirements of special needs passenger user groups including wheelchair users. As the fleet size rapidly expanded, it was clear that the interior design package had to be maintenance friendly.

Flooring played an important role in the narrative persuading kiwi commuters to leave their cars at home and take the train. It was determined that ‘soft’ flooring would be an integral part of the design. After trials with a couple of different options, Forbo’s Flotex Montana Anthracite was selected as the ideal product that could give the right “look and feel”, while also being exceptionally durable, watertight and with good fire ratings certification.

With 20% growth every year, these second hand trains delivered the business case for electrification

The initial 20 odd carriages grew to 150 vehicles sourced second hand from around the world. The fleet included 100+ former British Rail MK2 carriages which were gutted, stripped down to a bare structure, rust removed, and then re-clad with new commuter doors in place of old British end doors, new narrow gauge bogies, new train systems and of course a whole new interior. In the words of the Prime Minister of the time launching the upgraded fleet, “A sow’s skeleton has been turned into a silk purse!”.

Patronage immediately “took off”. Train travel started to enter the urban zeitgeist alongside the revitalization of central Auckland and the opening of the waterfront for development. A new city-centered vibe was being created to wake Auckland out of its sleepy suburban slumber into a modern cosmopolitan Pacific hub.

The lighting design won an award from the Illuminated Engineering Society of Australia and New Zealand (IES). The award was given for the simple but effective use of lighting to create a reflected lighting environment using techniques more commonly associated with commercial aircraft.

Progressive fleet growth from further batches of second hand “donor” vehicles kept pace with passenger growth. At the time there was a concern that at a certain point, growth would “top out”. But in practice, growth has stayed at a consistent 20 % per annum to this day. As it became clear that train travel was destined to play a big role in Auckland’s future, the funds were released to rebuild the tracks, signalling and stations into a modern network able to accommodate a new electric train fleet.

Although largely unsung, the fleet of second-hand trains all containing a common interior design scheme helped kick-start the growth to 10 million riders per year; the threshold for electrification and brand new trains – the much acclaimed CAF built fleet. Forbo products have continued to feature in the new CAF built electric trains, but that is another story.

In the 12 months to April 2017, 19 million passengers per year traveled by train in Auckland. The threshold has been reached for a new tunnel to provide a through route under the central city (a miniature version of London’s CrossRail)… The ‘City Rail Link’ will double the capacity of the network and is expected to be completed by 2023.
The transformation from 900,000 passengers per year in the early 1990s to 19 million at present – and double that figure to 38 million in the years to come – would have to be one of the bigger turnaround stories in the rail industry. At every step, the engagement of passengers through design was and is an integral part of the growth strategy.

FOR ALL THE LATEST TRANSPORT NEWS FROM FORBO, PLEASE CLICK HERE. 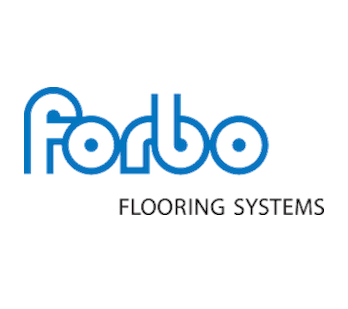 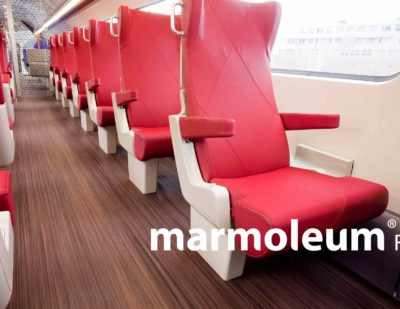 Forbo: The Widest Portfolio of Compliant Floor Coverings for...

Forbo offers the widest portfolio of compliant floor coverings for rail on the market. As more and more people eschew commuting by car, rail has become...

The Industrial Strategy is the long-term strategic management of the economy to help the UK to respond to challenges to achieve greater future prosperity. 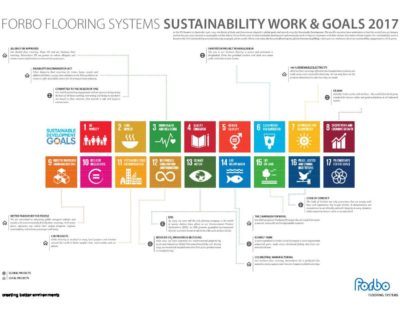 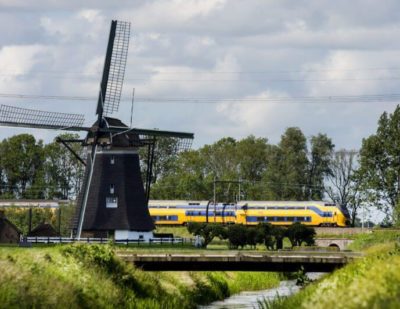 A Sustainable Global Transportation Network, by Forbo Flooring. With Earth Day taking place tomorrow, we take the time to reflect on the measures that... 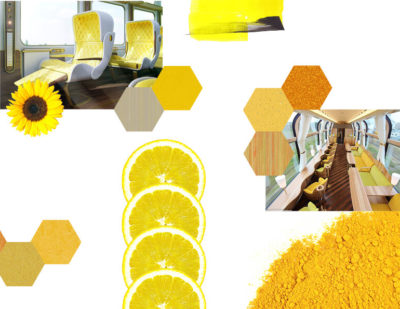 How Can Colour Impact on Passenger Experience?

Different shades and hues spark different feelings in people but how can this be applied to the passenger experience? Colour helps to create a certain...

Use the form opposite to get in touch with Forbo Flooring directly to discuss any requirements you might have.