Fiberline Composites A/S is one of the world’s leading suppliers of pultruded GRP profiles for the construction industry. For more than 30 years they have manufactured durable solutions for construction purposes all over Europe. Their focus is quality, efficiency, and a high degree of technical innovation.

Fiberline GRP profiles have an evident success record within the construction industry due to the combination of high strength, low weight, and corrosion resistance. Therefore, the profiles form an excellent and cost efficient alternative to more traditional materials such as wood, steel and aluminum.

In 2014, Fiberline became the first and only manufacturer of pultruded GRP profiles in the world to be granted Germany’s prestigious approval “Allgemeine Bauaufsichtliche Zulassung” (abZ) for its programme of structural profiles. In the wake of the abZ approval we also succeeded in obtaining a coveted approval by the German railway union, Eisenbahn-Bundesamt (EBA). This means that their structural profiles can enter into all construction works initiated by Deutsche Bahn. Fibreglass composite features a number of unique advantages which make it a suitable construction material in connection with railways. The light, strong and corrosion resistant material, which is electrically insulating, is well suited for railway bridges, platforms, canopies, and many other applications. The EBA approval is therefore an important milestone for Fiberline in its efforts to become a major supplier to the German railway sector.

From its modern headquarters in Denmark Fiberline constantly push the boundaries of GRP material in order to meet the requirements of a modern, energy conscious society.

The Fiberline bridge was erected in 1997, and still requires no maintenance. It was the world’s first and largest bridge ever to be built of GRP, but also the first to cross a railway. The 40-meter bridge crosses one of the busiest railways in Denmark, therefore, possession time and safety were paramount for the choosing of this bridge. It took only 18 hours over three nights to install the bridge – a clear advantage that the composite material enables.

Composites are superior in a number of ways when compared to traditional materials like steel and concrete. It possesses an extreme strength and stiffness combined with low weight. It is also completely corrosion and weather resistant, while being a non-conductive material – an important feature when building near railways.

An elegant wing was installed at Lindevang metro station, Frederiksberg in 2003. It was drawn by KHR architects and Fiberline Composites developed the roof construction which is made from GRP. The roof appears to be a long aircraft wing, 60 meters long, 7,5 meters wide and 60 cm at the broadest place. The roof is held up by two pylons in each end. The pylons are connected with wires keeping the roof in place – just as a suspension bridge – therefore, there are no beams under the construction.

Due to safety reasons, the old concrete bridge crossing Husum Station in Copenhagen needed to be completely replaced. When Fiberline’s hybrid bridge solution was chosen for Husum, the most decisive factor was the installation process minimally disrupting the main train traffic. Therefore, it was necessary with a bridge from Fiberline that was strong and light weight, but could also be assembled quickly. Here, an FBD 300 (Fiberline Bridge Deck) made of GRP composite was chosen.

The deck was prefabricated and could be easily transported and installed. The bridge has a steel substructure which rests on the existing original concrete foundation, which could be kept due to the new bridge’s low weight that would put less strain on the concrete. Keeping the existing foundation was an effective and fast solution that had no effect on the train traffic.

Fiberline Composite’s railing system has some extraordinary abilities when used for infrastructure. The railing system can be installed fast and easy as it has an almost non-existing possession time. The light weight structure requires no cranes and the expenditures on installation are therefore minimal. Most importantly, the railings from Fiberline are nonconductive – a paramount feature for construction materials used near railroads and rails.

In 2012, Fiberline supplied more than 32 kilometer of gratings for Copenhagen’s Nørreport Station, Denmark’s busiest rail interchange. The gratings are positioned between the tracks and at emergency exits along the underground platforms.

Uniquely among composite gratings, Fiberline’s special phenolic gratings conform to Fire Class B of European Standard EN13501 and are therefore the natural choice for applications where corrosion- and chemical resistance while complying with the EU’s new Tunnel Safety Instructions are high priority considerations.

GRP Profiles and Gratings for British Rail and Deutsche Bahn.

The paths at the station are covered with Fiberline Composites’ GRP gratings that are non-conductive, light weight and non-corrosive.

A new type of platform has been developed by ilecsys for Britain’s railway using Fiberline Composites’ GRP material. The platform has gained type approval from Network Rail.

The platform is a module construction that is suitable for a various range of railway applications. Because of the light weight material and the fact that GRP profiles and gratings can be machined on site, and the platforms can be installed with ease in a matter of hours. 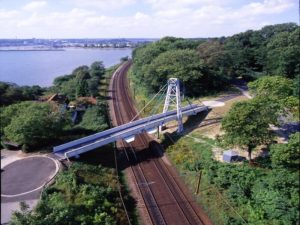 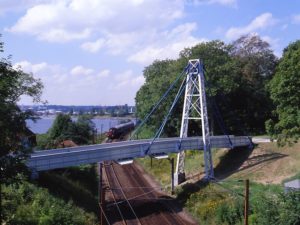 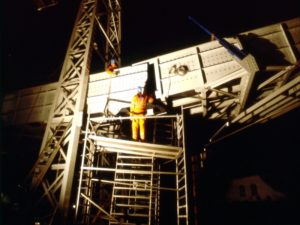 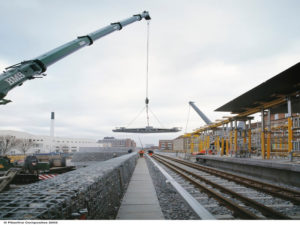 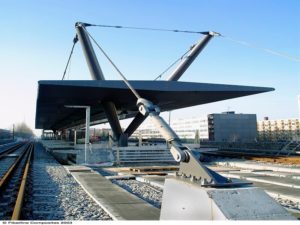 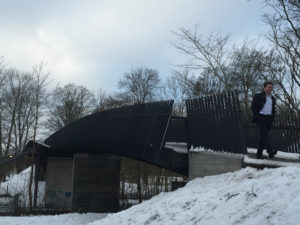 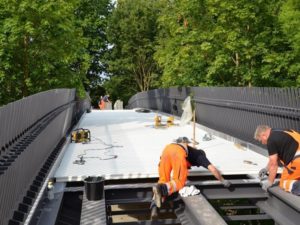 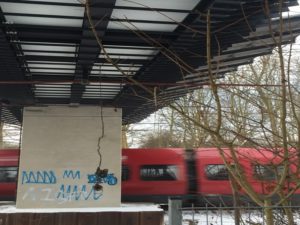 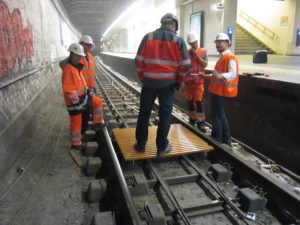 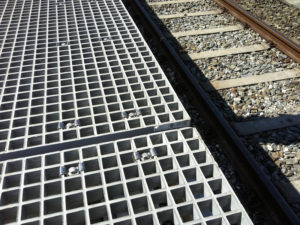 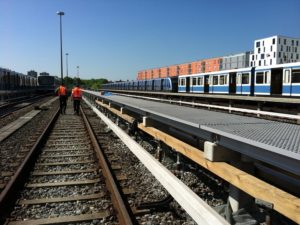 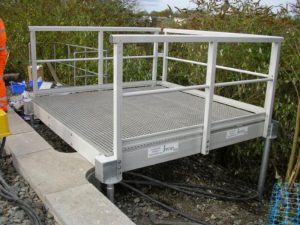 Platforms from Fiberline Composites are Easy and Fast to Install 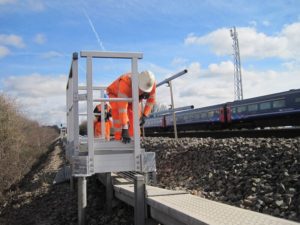 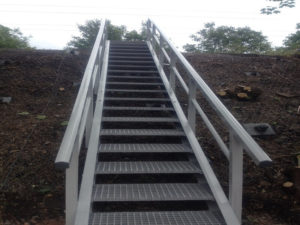 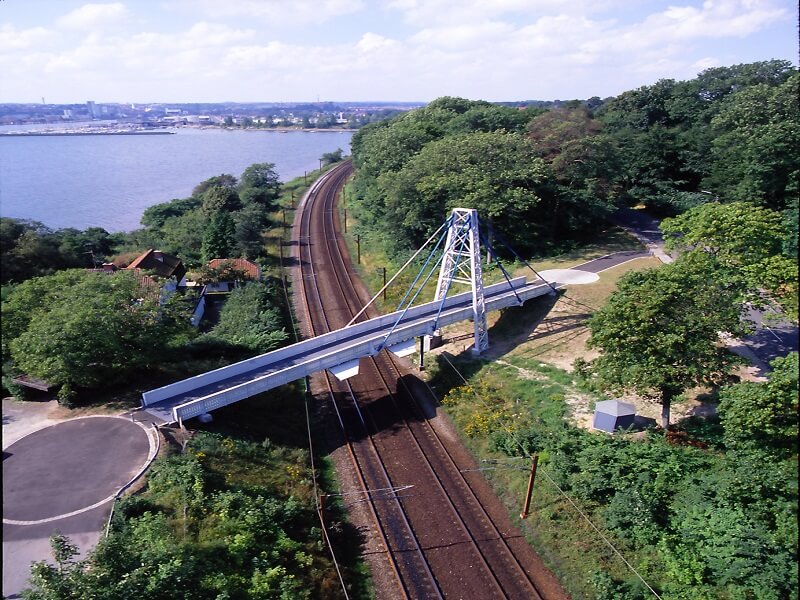 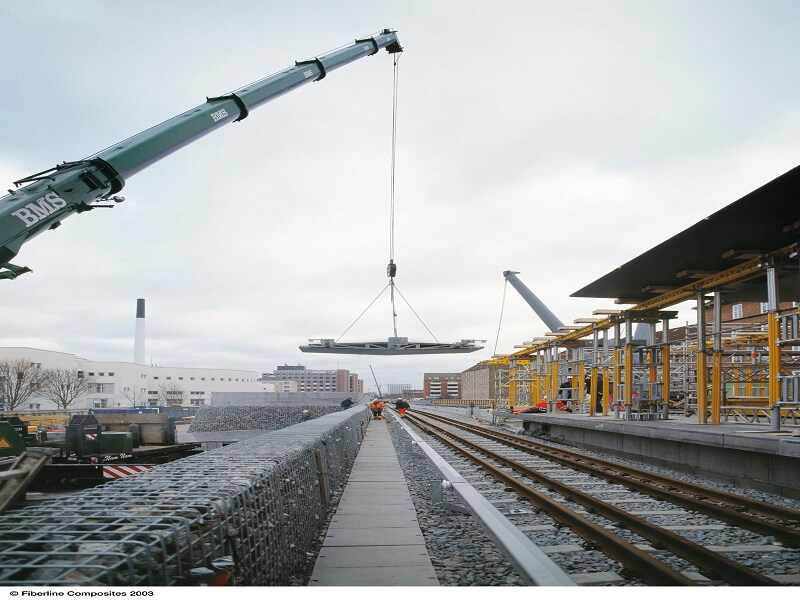 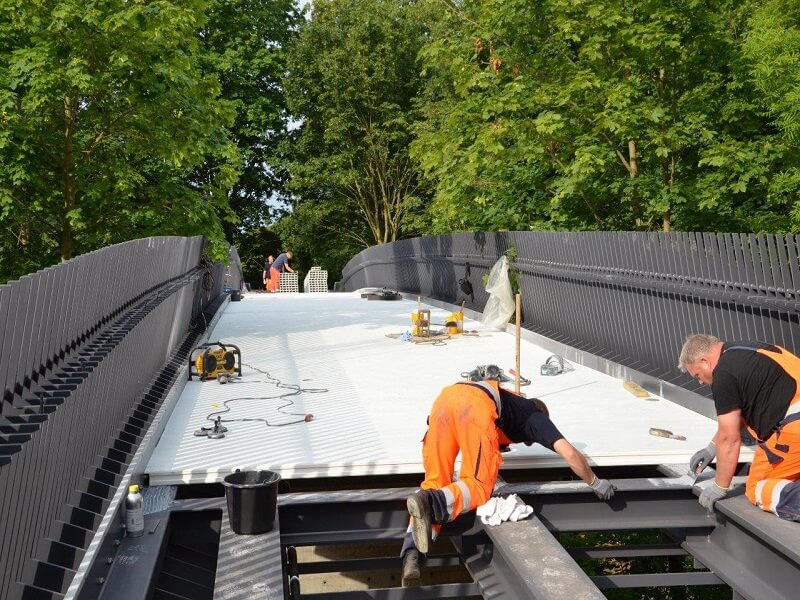 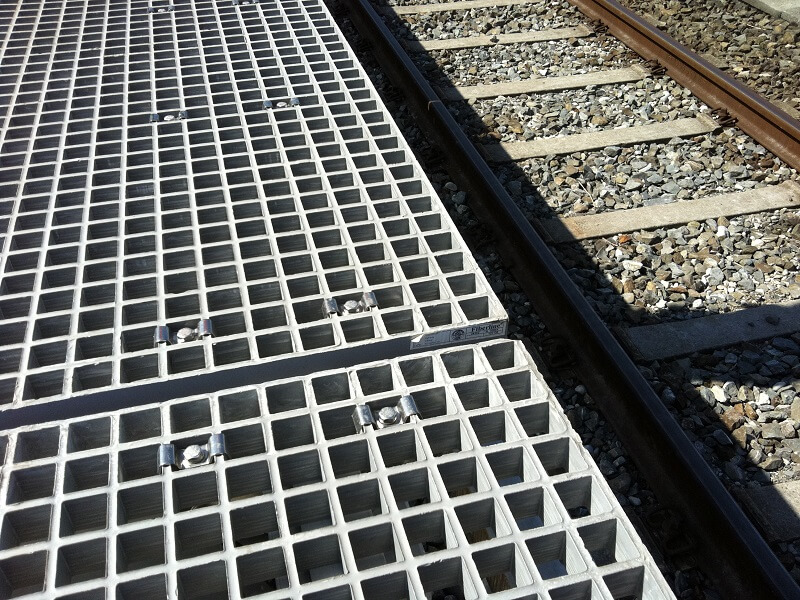 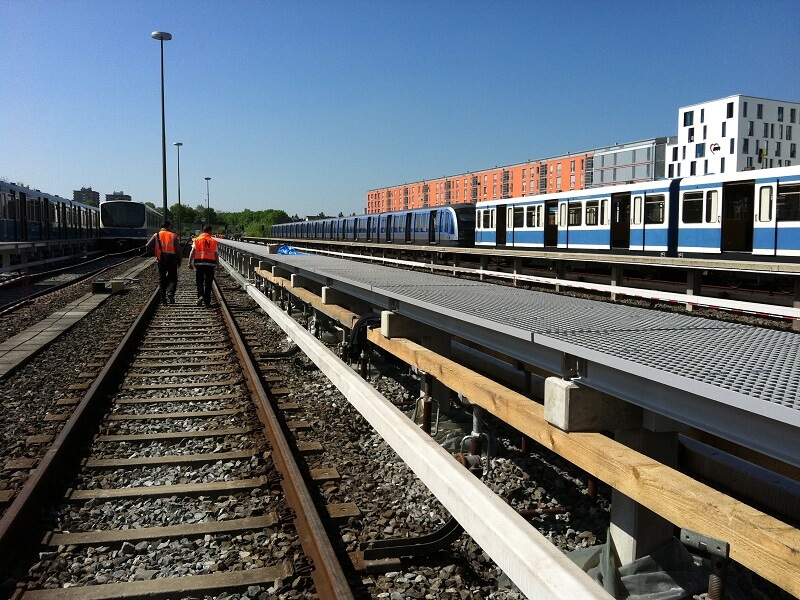 Use the form opposite to get in touch with Fiberline Composites A/S directly to discuss any requirements you might have.