Plasser & Theurer has many years of experience in rail welding. Flash-butt welding machines offer technological advantages for the durable joining of rails under the most varied operating conditions, which could otherwise not be achieved. Current examples from Japan, Mexico and the United States prove this.

With this APT 1500 RL, Plasser American introduces flash-butt welding in the US

Among the different rail welding techniques, the fully automatic electric rail flash-butt welding process is particularly fast and produces highly accurate, high-quality, clean and well documented welds. Available in different designs, Plasser & Theurer’s APT 1500 R rail welding robot ensures this for any type of operation: the APT 1500 RA is a rail-bound vehicle, the APT 1500 RL an on/off-track truck, and the APT 1500 RC is a container, that can be mounted on a carrier vehicle. Introduced in 2012, more than 20 of the state-of-the-art model of the flash-butt welding robot are already operated worldwide. Although the working conditions and local challenged vary greatly, the machines produce consistently high welding quality in the shortest possible time. To a large extent, the welding process is automated. Follow-up work at the weld is reduced to a minimum.

For the first time since the Tohoku Shinkansen of East Japan Railway Corporation (JR East) was put into operation in June 1982, the rails are being exchanged. Since 2017, the works have been carried out in very short night-time track possessions. The works are scheduled to be completed by 2026. Together with Nippon Plasser and ROBEL Bahnbaumaschinen GmbH, Plasser & Theurer supplied the REX-S 1200, a special rail exchange system. The REX-S includes an APT 1500 RA, which was specially adapted to the local particularities such as the low wheelset load of a maximum of 15 tonnes.

Due to the short time windows, a complete exchange of the rails is not possible. Therefore, 150 m long rail sections are pre-deposited and the APT 1500 RA mobile flash-butt welding machine welds them to section of up to 1200 m. In addition, the rails are ground and fixed. During a second night-time track possession, the old material is exchanged with new material within 30 minutes using two REX-S special vehicles, and the rail ends are joined – also using the APT 1500 RA welding robot.

Before we were able to introduce the innovative electric flash-butt welding process onto the market, a new type of method for Japan, we had to provide extensive quality certificates. To prove the consistently high welding quality, the welding machine was tested using JIS-60 Shinkansen rails, which were delivered to Austria particularly for testing. For closure welding, which is an integral part of the exchange of rails, a separate test rig was set up. 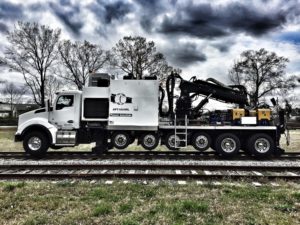 The APT 1500 RL for the USA on a typical US truck with additional axles, for use on and off track

For the first time, an APT 1500 RL, mounted on an on/off-track truck, is operated in the United States. Plasser American and Plasser & Theurer mounted the modified APT 1500 R on a US chassis with two rail axles and a total of seven axles with rubber tyres (four of which can be lifted). Adjusted to the local conditions, this APT 1500 RL of the infrastructure operator CSX Transportation is the first fully automatic rail welding robot on the American market. Its axle load distribution complies with the US Bridge Laws and allows for transporting the machine, including the welding head, by road without a special permit.

The machine is mostly used by so-called rail gangs. They continuously use several machines to carry out specific tasks. The APT 1500 RL is used after the exchange of rail pads. Unlike in Europe, the rails are cut open and temporarily displaced towards the track axis. When exchanging rails, it can be necessary to correct differences in profile or height. In addition, it is often necessary to weld in a transition piece when the rails have a different level of wear or when different profiles must be joined.

Unlike other known designs for rail and road vehicles, the welding unit’s resting position is not integrated into the US truck. When the truck travels on the rails, it is powered by the tandem axle unit of the truck chassis. The two rail wheelsets of the “Hi-Rail” equipment guide the wheels. The eye-catching vehicle was presented at the US trade show Railway Interchange in September 2017. For rail welding in North America, it is a major leap in quality and efficiency.

A flash-butt welding machine proves its efficiency during operation at a height of up to 2,650 m above sea level in Mexico. Originally built for stationary operation, the APT 1500 RC in container design is now used on a lorry carrier vehicle to build a 60 kilometre line for regional passenger service. In the first half of 2018, the “Tren Interurbano México–Toluca“ will be put into operation. The newly built line will mostly run on viaducts or in tunnels. The new line is expected to cause a shift from road to rail, given the projected reduction of the travelling time to less than 40 minutes by train, compared to 2.5 hours by bus. This will be an enormous environmental benefit. 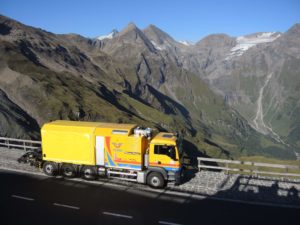 Successful welding test on the Großglockner: The APT 1500 R is also suited for railway lines on high mountains

The rail profile and grade used for the project comply to European Standards. Prior to their assembly, the APT 1500 RC welds them to long welded rails. In two shifts, on six days a week, the robot carries out up to 200 welds. Producing a consistently high welding quality is a particular challenge: Due to physical constraints, the high altitude of the construction site reduces the output of the drive engine. Mid frequency power electronics ensures a high energy supply and a consistently high level of welding quality. Prior to being put into operation, tests welds had to be made: Welded on 2,660 m above sea level in Toluca, the samples were successfully tested in a European laboratory. They meet all requirements.

From the Lowlands to the High Mountains

The flash-butt welding robot was successfully operated in Mexico. To provide our services to other railways and infrastructure operators with rail networks on 2,000 m above sea level and higher in the future, we tested the APT 1500 RL at high altitudes in Austria. On the Großglockner High Alpine Road, the machine successfully welded rail sections that were brought there particularly for testing. Regardless of the track gauge or maximum axle load, the welding robot proves its efficiency not only on high-speed lines and busy freight lines, but also on mountain railways.

FOR ALL THE LATEST INFORMATION, NEWS, IMAGES, VIDEOS AND DOCUMENTS FROM PLASSER & THEURER, PLEASE CLICK HERE. 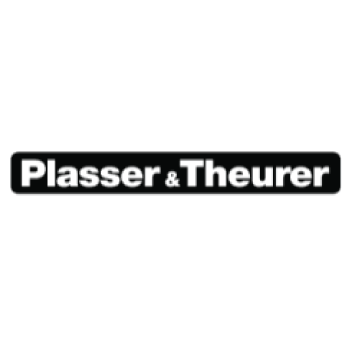 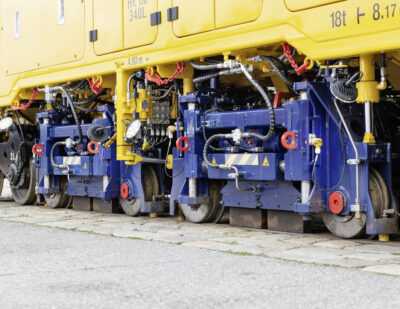 With Plasser & Theurer’s newly developed rail grinding machine for light rail and trams, rail traffic is easy on the ears. 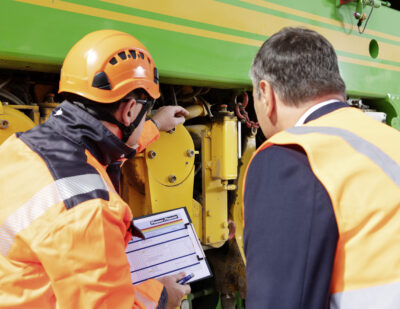 Together with the global partner companies Plasser & Theurer has proven to be a reliable service partner for decades. 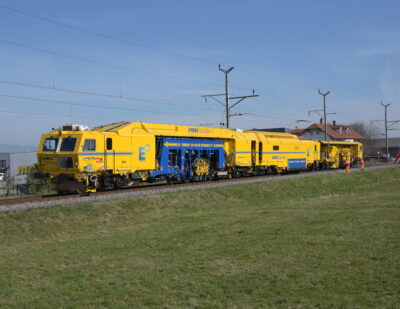 The Unimat 09-32/4S Dynamic E³ universal hybrid tamping machine received unlimited approval for operation in Germany in the summer of 2020. 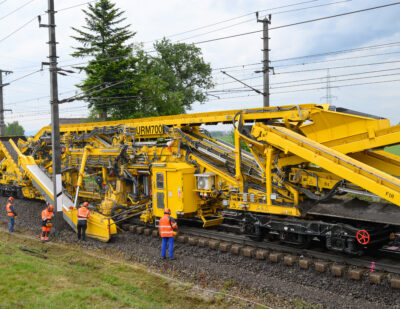 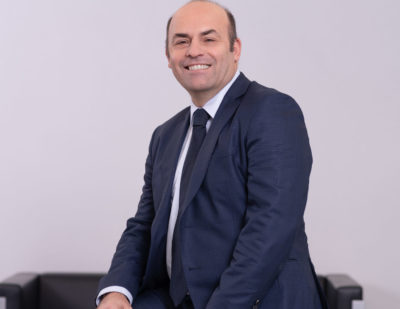 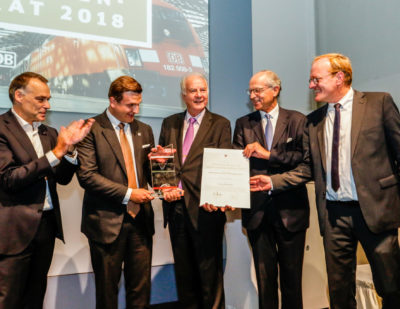 In a ceremony at InnoTrans 2018, the International Trade Fair for Transport Technology in Berlin, Plasser & Theurer was presented with the DB Supplier Award in ... 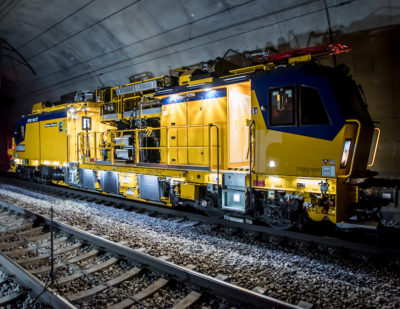 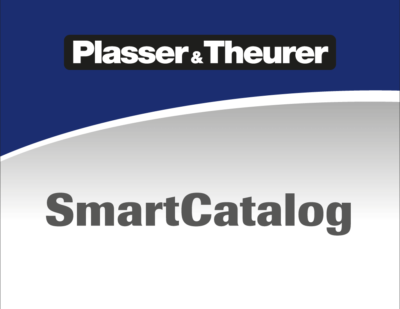 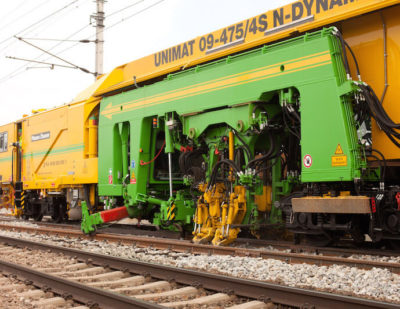 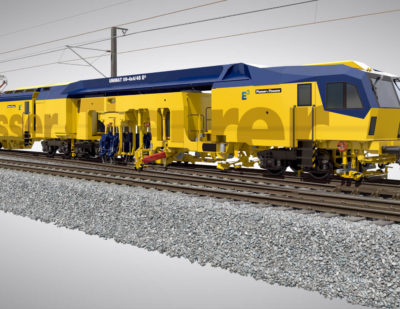 Seventeen machines, new service offers and smart assistance systems - at this year's iaf Plasser & Theurer is entirely dedicated to Innovation for you. 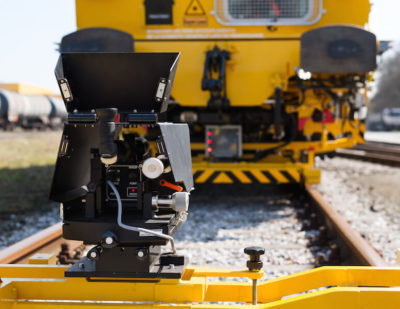 Upgrade your tamping machine with laser devices for surveying work: the levelling and alignment laser for plain track and the curve laser system for... 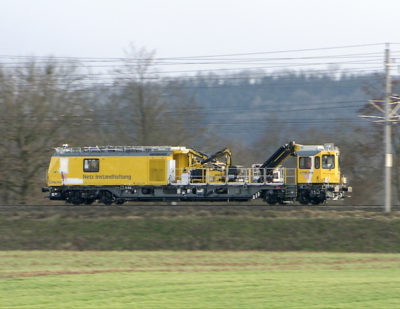 Plasser & Theurer will debut their new universal 2-sleeper tamping unit for tracks and turnout at InnoTrans 2016 in Berlin this September.

Use the form opposite to get in touch with Plasser & Theurer directly to discuss any requirements you might have.