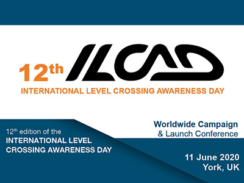 The launch conference of the 12th edition of ILCAD hosted by Britain’s railway infrastructure manager, Network Rail, will take place on 11 June 2020, at the National Railway Museum in York. It is wonderful place that displays a large collection of locomotives and other items of rolling stock, virtually all of which either ran on the railways of Great Britain or were built there.

The international conference on 11 June will be preceded by a social event on 10 June at the same place in the evening and followed by a technical visit on 12 June.

ILCAD spearheaded by the UIC draws railway industry representatives, road authorities, academics and more from around the world – aims to raise awareness about the dangers associated with the road/rail interfaces (level crossings).

ILCAD is a joint commitment that began in 2009 with ELCAD (EU countries + Israel). Since then, UIC has been coordinating this worldwide event to raise public awareness about the dangers at level crossings.

This year the 2020 conference and worldwide campaign will not have a focus on specific topic in particular. But, look to highlight how a person’s behavior affects how the use and interact with a level crossing with the “Beware the Bubble” concept. We want people to understand when they are “in their bubble” so they can burst it and see the dangers and risks more clearly.

Use the form opposite to get in touch with UIC directly to discuss any requirements you might have.